What We Believe – Redemption of Mankind 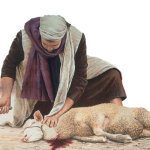 The only means to be cleansed from sins is by grace, through faith in the shed sacrificial blood of Yeshua HaMashiach, and that repentance from sin and regeneration by the Holy Spirit (Ruach Hakodesh) is absolutely essential for personal salvation. There is no other Name than that of Yeshua by which all Jews and Gentiles must be saved. (Ephesians 2:8; James 2:14-26; Matthew 18:3; John 3:3)

Leviticus 17:11, “For the life of the creature is in the blood, and I have given it to you on the altar to make atonement for your lives—for it is the blood that makes atonement because of the life.”

Acts 4:11-12, “This Yeshua is ‘the stone—rejected by you, the builders—that has become the chief cornerstone.’ There is salvation in no one else, for there is no other name under heaven given to mankind by which we must be saved!”

The Weight of Sin

By Grace through Faith

Righteousness before God has always been by God’s grace and mercy through our faith and trust in His provision. [Rom. 4:3 and Jas. 2:23] Abraham demonstrated his trust in God.

The covenant given to Moses at Sinai was based upon a satisfaction of God’s righteous requirement through the substitution of an innocent, spotless animal. [Lev. 17:10-12] Adonai tells Beni Yisrael that the blood makes atonement because of the life. Life for life.

Dr. Michael Brown points out that, “A careful study of the Five Books of Moses indicates that more chapters are devoted to the subjects of sacrifices and offerings than the subjects of Sabbath observance, high holy days, idolatry, adultery, murder, and theft combined.”[i]

While Judaism now denies the need for blood to atone, nothing in all of the Hebrew Scriptures says that Sacrifice has been done away with. Instead, many of the prophets talk about how the sacrifice and offerings will be re-established in the last days. The end of (Zech. 14: 16-21) we see that alter of sacrifice will be used again in the Millennial Reign of the Messiah.

One of the objections that Jewish people raise, is that Adonai required the blood of a goat, lamb or bull, not a person, and that Adonai does not want human sacrifice.[ii] This is actually something that we all agree with. Human sacrifice was always the pinnacle of a wicket culture that had rejected God, made gods in their own likeness. We read in (2 Kings 21:6) how Manasseh, king of Judah, “made his son pass through the fire” in worship of foreign gods. How then can we say that Yeshua was a sacrifice, and that His blood is what is needed to atone for our sins?

The Death of the Righteous Atones

Earlier we mentioned the trust and faith of Abraham. The greatest test of Abraham’s trust in Adonai is in [Gen. 22], The Binding of Isaac. Contrary to many teachings, Isaac was not a young boy. He was actually in his early thirties as we see from the very next chapter. This story actually demonstrates not only the faith of Abraham, but also the faith of Isaac. (4 Maccabees 13:12; 16:20) states that, “Isaac offered himself for the sake of righteousness …Isaac did not shrink when he saw the knife lifted against him by s father’s hand.”[iii] The Rabbis taught that, “Scripture credits Isaac with having died and his ashes having lain upon the altar” (Midrash HaGadol on Genesis 22:19, Sifra, 102c; b. Ta’anit 16a)[iv]

From this passage and many others, the Rabbis taught that, “The death of the righteous atones just as well as certain sacrifices.” And that “atoning effect extends to all the generation” [Mekhilta 2a; m. Negaim 2:1][v]

Another passage in Scripture where we see this is [2 Sam. 21:12-14]. Here we see that David puts to death the sons of King Saul, and their death pays for the sin of Saul killing the Gibeonites.

In commenting on Isaiah 53, the Zohar (a book of Jewish mysticism) states the following:

“The children of the world are members of one another, and when the Holy One desires to give healing to the world, He smites one just man amongst them, and for his sake heals all the rest. Whence do we learn this? From the saying, “He was wounded for our transgressions, bruised for out iniquities” [Isa. 53:5], i.e. by the letting of his blood – as when a man bleeds his arm – there was healing for us – for all the members of the body. In general a just person is only smitten in order to procure healing and atonement for a whole generation.”[vii]

[Romans 5:7-9] “For rarely will anyone die for a righteous man—though perhaps for a good man someone might even dare to die. But God demonstrates His own love toward us, in that while we were yet sinners, Messiah died for us. How much more then, having now been set right by His blood, shall we be saved from God’s wrath through Him.”

We are guilty, but Messiah died in our place. We owed Adonai a debt that we could not pay. He paid the debt.