What We Believe – Purpose of Israel 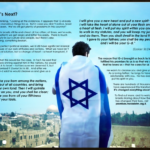 Israel exists as a covenant people through whom G-d continues to accomplish His purposes. In accordance with the New Covenant, Jews and Gentiles who acknowledge Yeshua as Messiah and Redeemer are an elect people and now worship together in the house of G-d (Ephesians 2:2-14; 1 Corinthians 12:13, Hebrews 10:16)

Promises of the Past

This covenant, known as the Abrahamic, is unilateral. There are no preconditions. Most covenants have conditions for both sides, however Adonai promises Abram both descendants as numerous as the starts and the land from the river of Egypt to the Euphrates. As a sign of this covenant, Abram was renamed to Abraham and Adonai commanded him to be circumcised and circumcise all the males who were with him.

This was followed up with the covenant at Sinai, however the covenant with Moses was bilateral. The dwelling of Israel in the Promised Land was contingent on the people walking in Adonai’s statutes and keeping His mitzvot. (Lev. 26, Deut. 28) However if the people broke the covenant made at Sinai, then Adonai promised to bring punishment and eventually expulsion from the land.

But none of these blessings or curses nullified the covenant with Abraham concerning the land and the people. Moses states it this way in [Deut. 30:1-6].

Here we have the Davidic covenant. Adonai promises David an eternal lineage, a kingdom that would not end. Adonai also promises to be a father to David’s son, to bring discipline but to never remove His loving-kindness. David understood Adonai’s covenant and responds in [7:19] that this is a “Torah for all humanity”. Because from the seed of David would come a deliverer who would bless the world just as was promised to Abraham. Notice that nothing in this covenant nullifies any of the previous covenants. David still recognized that the descendants of Israel (at that time the nation of Israel) were still promised the land [7:23-24].

Promises of the Present

The passage then goes on to explain that this new covenant will supersede one of the previous covenants. Which one? The Abrahamic? The Mosaic? Or the Davidic? It is the covenant that Adonai made “when [He] took them by the hand to bring them out of the land of Egypt.”

Why is Adonai needing a new covenant? Because Beni Yisrael broke that covenant.

Jeremiah then goes on to confirm the people of Israel and the land. In particular, Jeremiah speaks of the City of Jerusalem being “holy to Adonai” and “never [to] be uprooted or thrown down again- forever.”

What about the Gentiles?

While I don’t want to spend much time on it today, I do want to briefly mention the Gentiles. The Mystery of the Good News, that Sha’ul talks about in (Rom. 9, 10 & 11) and particularly in (11:25) is that Adonai would graft Gentiles into the new covenant promised to Israel through Jeremiah. This is pure mercy of Adonai, which is why none of us can boast or be proud. This mercy of God to include the Gentiles in the promises to Israel caused Sha’ul to explode in praise [Rom. 11:33-36].

Promises for the Future

Now getting back to the promises for Israel. The New Covenant is still for the children of Israel by birthright, and there is nothing in the new covenant that replaces the Abrahamic or the Davidic covenants. And with regards to the Mosaic covenant, it does not replace the Torah, but rather writes the Torah on their hearts, causes them to know Adonai and provides forgiveness for sins. So, the only part of the Mosaic covenant that is superseded by the New Covenant are the offerings for sin and iniquity.

David Ben Gurion said this, “A Jew who does not believe in miracles is not a realist.” (refer to Supernatural or Just Remarkable)