What We Believe – Immersion in Water 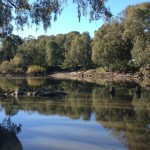 We participate in Mikvah immersion (water baptism) of believers as commanded by the Scriptures, as an outward sign of an inward salvation experience, and symbolizing the death of the “old” man and the resurrection into newness of life. (Matthew 28:18-20; Romans 6:4)

Acts 19:2-6, “[Paul] said to them, “Did you receive the Ruach ha-Kodesh when you believed?” They replied to him, “No, we’ve never even heard that there is a Ruach ha-Kodesh.” He said, “Into what were you immersed?” They said, “Into John’s immersion.” Paul said, “John immersed with an immersion of repentance, telling the people that they should believe in the One coming after him—that is, in Yeshua.” When they heard this, they were immersed in the name of the Lord Yeshua. And when Paul laid hands upon them, the Ruach ha-Kodesh came upon them, and they began speaking in tongues and prophesying.”[i]

To begin with, where does the word baptize come from? Baptize comes from the Greek baptizo, which like its Hebrew equivalent tevilah mean to totally immerse.

The Scripture mentions several reasons for tevilah, but one of the most significant is when Israel washed their clothes before they met Adonai at Sinai. Here Adonai calls the people to sanctify themselves, or make themselves holy and set apart for Him because He was about to enter a marriage covenant with them. (Exodus 19:9-11)

Hillel, grandfather of Gamliel, argued that the mikvah (immersion bath) was more important than circumcision for it symbolized repentance, spiritual cleansing and a rejection of paganism.

The tevilah was always done in living (fresh, running) water, which is still true of the modern day mikvah.

Why We Are Immersed?

Tevilah is usually one of the first steps of our walk as believers in Yeshua. (Acts 10:43-48) It is not always the first, as was the case with Cornelius and his family, but is definitely one of the initial steps to demonstrate a rejection of all other gods and an acceptance of the one True God.

Although tevilah does not confer salvation, Peter calls it a pledge that we make to follow Yeshua for our whole life. (1 Peter 3:18-22) Peter compares immersion to the story of Noah, where 8 people were carried safely through the water and the judgement of God. He goes on to say, “immersion now brings you to safety—not the removal of dirt from the flesh, but a pledge to God of a good conscience—through the resurrection of Messiah Yeshua.”

Yeshua instructed his talmidim to perform tevilah on new talmidim. (Matt. 28:18-20, Mark 16:16) This is the called the Great Commission, and here Yeshua calls us all to go and make talmidim or disciples. Part of this discipleship is, “immersing them in the name of the Father and the Son and the Ruach ha-Kodesh, [and] teaching them to observe all [He] have commanded [us].”

Yeshua never asks us to do anything that He was not willing to do Himself, and tevilah is no different. Yeshua set the example, and was immersed by John, even though it was not necessary for Him to do so. (Matt. 3:13-17) Tevilah normally demonstrates teshuvah (or repentance) and the cleansing from sin (Mark 1:4-11). Yeshua had no sin, but led us up path we could follow.

Tevilah demonstrates our total commitment and surrender to Yeshua forsaking all other gods. Through it we partake in His death, burial and new life! [Romans 6:1-11]

The Story of Philip

What can we learn from Philip’s story? We see that people heard the preaching of the Good News of the Kingdom of God and Yeshua the Messiah. After believing they were all immersed in water. In the case of those in Samaria they did not receive the Ruach ha-Kodesh until Peter and John came down from Jerusalem and laid hands on them. In the verse we read earlier about Paul, people were immersed and then directly afterward they were filled with the Ruach by the laying on of Paul’s hands. And in Cornelius’s case the people were filled with the Ruach of God before being immersed in water. Regardless of when or how, there should be an expectancy of being immersed in the Ruach ha-Kodesh.

What Then Shall We Do?

When Peter was asked this question, he answered, “Repent, and let each of you be immersed in the name of Messiah Yeshua for the removal of your sins, and you will receive the gift of the Ruach ha-Kodesh. For the promise is for you and your children, and for all who are far away—as many as Adonai our God calls to Himself.” (Acts 2:37b-39)