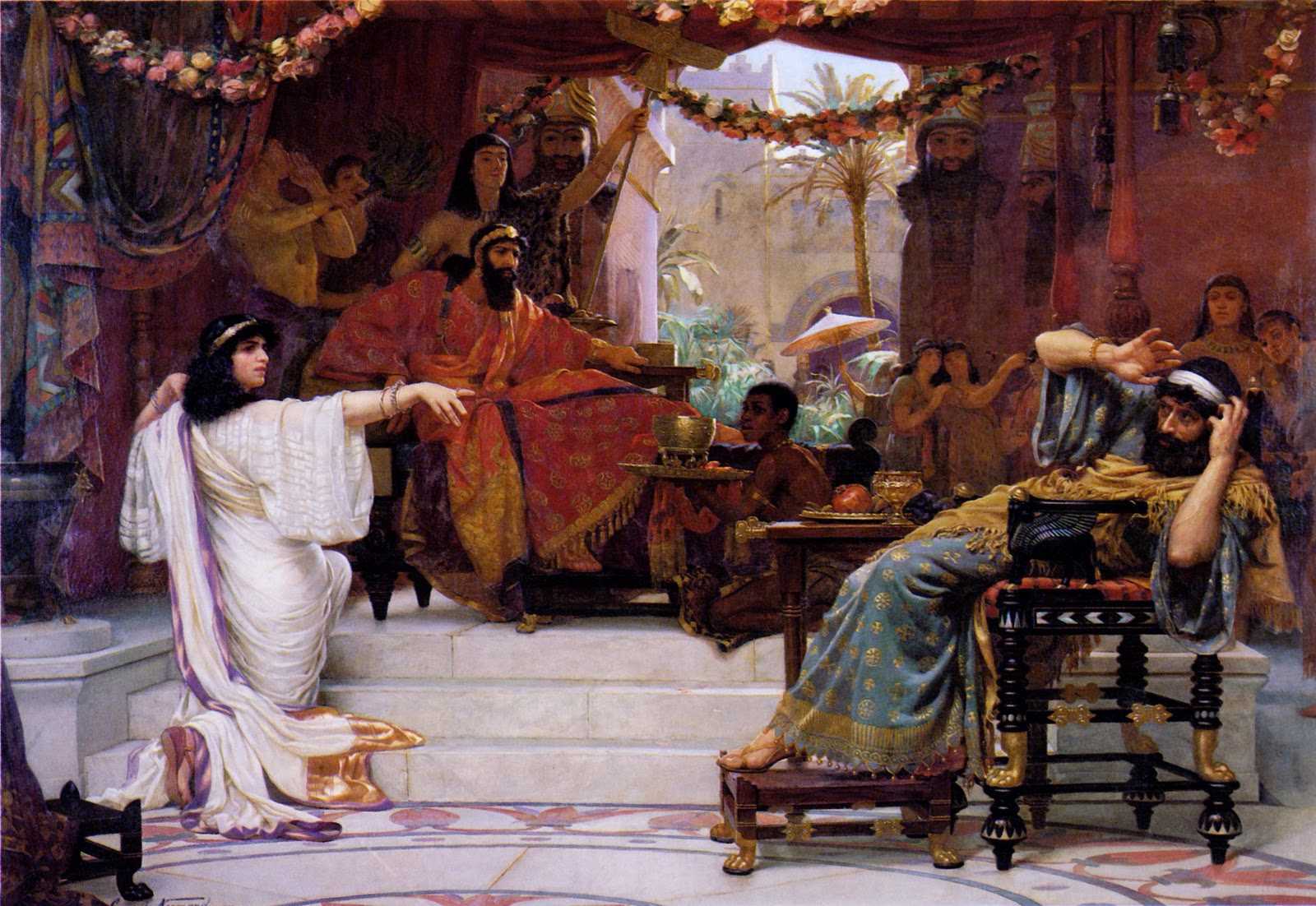 The story of Esther is really a continuation of the much longer narrative of Amalek. This is a story that the L-rd says will go on from generation to generation. So in order to get a better understanding of Haman the Agagite, and an understanding of this story’s relevance to us, we need to see where this story starts.

Amalek is the grandson of Esau from his Canaanite wife, Adah, and his intermarriage with the people of Seir through Timna. This becomes important because the prophets later on will refer to Edom, Esau & Mt Seir, and all of these prophesies are applicable to the Amalekites. 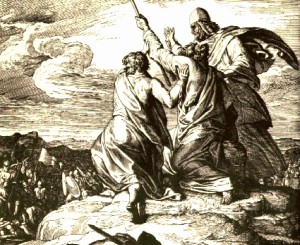 In Exodus 17:8-16, this is recounted in Deut. 25:17-19, we learn a lot about this enemy, Amalek. For instance, they attacked without warning and when they did it was not a frontal assault. Moses recounts in Deut. that they attacked the rear ranks, the stragglers, those who were tired and weary, the women and children. Also, the battles fought against the Amalekites are spiritual as well as physical. In their first battle, Israel won because Moses “held up the rod.” The L-rd reinforces this when He says that He will personally be at war with Amalek. In Exodus 17:15, we see that The L-rd is known as Jehovah-Nisi, which we see from the context is a banner of WAR. This is the same context as Isaiah 59:19, “When the enemy comes in like a flood, The Spirit of the L-rd will lift up a standard against him.”

It is interesting to note that by mentioning the location of Amalek attack, Rephidim. The Scripture alludes to the reason for the attack. In Rephidim, Israel questioned G-d’s presence among them. The lack of trust in G-d opened the door for the attack of the enemy.

A literal translation of Exodus 17:16 reads, “For the hand is on the throne of G-d: The L-rd maintains a war against Amalek, from generation to generation.” A commentary on this verse states:

The plain meaning of verse 16 is a reference to Jewish kings. As long as a Jew’s “hand” i.e. power, is on the royal throne, he must carry on G-d’s war against Amalek. Thus as soon as Saul became king, he was commanded to wage total war against Amalek, and because he failed to carry out his charge, he was stripped of his throne, (1 Sam 15:14-27). (Chumash on Exodus)

We see that this role is finally fulfilled in Yeshua the Messiah in Obadiah vs. 15-21. The context of Obadiah is a prophecy against Edom to be fulfilled on the “Day of the L-rd” (verse 15). It states in verse 21 that the mountain [which means nation] of Esau [which includes Amalek] will be judged on the Day of the L-rd, and the L-rd will be king.

This brings us to King Saul and King Agag. In 1 Samuel 15:1-3, the L-rd commands Saul to annihilate 100% of the Amalek, and all they owned. However, Saul did not complete his task. Not only did Saul spare Agag, from whom Haman in the Book of Esther is a descendant, he also was not thorough with his military campaign. When the L-rd gives us a command, we must understand that there are consequences for disobedience (or partial obedience). We see this played out in the end of Saul’s life.

After Saul’s failure, and before his death, we find David, who is tired of running from Saul, and has decided to seek refuge in the land of the Philistines. King Achish had given him the city of Ziklag as a home. After returning to Ziklag from a 3 day trek, David and his men came home to find Ziklag in flames due to an Amalekite raid. All of the women and children had been kidnapped. We see through David’s actions, How to defeat the Amalekites.

We see that David “strengthened himself in the L-rd,” and then asked the L-rd if he should go up against them. This is critical. Here he was, after he and all his men had just lost their entire families, and he is asking IF he should go. Even in this place David knew he needed the L-rd to go before him. Well, the L-rd said, “Go,” and David went, and. even though he had only part of his army, he destroyed the Amalekites and recovered all . . . people and possessions.

Now we come back to the death of Saul.

We see from this passage that Saul was wounded by the archers, and then fell on his sword. He was presumed dead by his armor bearer, who then also fell on his sword. However, this is not the end of the story. In 2 Samuel 1:9, we see Saul asking someone to come over and finish him off. This individual kills Saul, takes his crown and bracelets and presents them to David. All we know of this individual is that he says of himself, “I am an Amalekite.” In this Divine reversal, we see that Saul finally reaped death because of his disobedience, directly from the hand of one whom he should have killed. 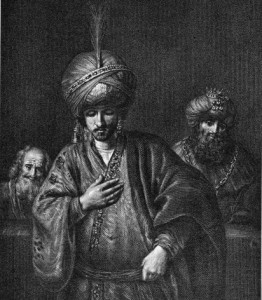 After David, the next time in history that we see the Amalekites is in the Book of Esther. In Esther 3:1, we see that King Ahasuerus promotes Haman the Agagite. The name Agag was a hereditary name for the king of Amalek. This can be seen from Balaam’s prophesy over the children of Israel in Numbers Ch. 24, and then again with King Saul, some 400 years later. What have not changed are the fundamental driving motivations of this Amalekite, Haman.

This ancient hatred is stirred up, not just toward Mordecai, but also toward all the Jews in the whole kingdom (Esther 3:5-6). When Haman presents his case to the king, he does not state the actual grievance [frontal assault] which was Mordecai’s refusal to bow to Haman. Instead, Haman in Ch. 3:8-9 uses the following tactics:

When the final order is written in Esther 3:13, we see that it is for the annihilation of all Jews, “young and old, little children and women.” This attack against the weak and undefended is a marker of the Amalekite spirit.

When the news gets to Esther, through Mordecai, we see that she responds the same was as King David. She knows that the only way to defeat this enemy is to win the battle in the spiritual realm first. She called in Ch. 4:16 for all the Jews in Shushan to fast for 3 days. She then puts her life on the line, and willingly stands up for her people.

Does the victory of the spiritual battle negate the need for a physical one?    Well . . . in Ch. 9:1-6 we see that “on the day that enemies of the Jews thought to overpower them, the opposite occurred” because “fear of them fell upon the people.” Instead of being defenseless, they routed the enemy. 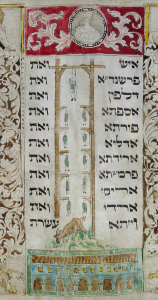 Did this spirit die with the death of Haman and his ten sons?    Unfortunately not, we see a recurrence of this hatred and tactics throughout history, and especially in recent history. An obvious example is Nazi Germany. Although he was not known to be a physical descendent, we see that Hitler followed the same play book as the Amalekites. He created G-d in his own image so that people no longer worshiped the G-d of Abraham, Isaac, and Jacob. This was done by Alfred Rasenburg’s 31 point program for the National Reich Church. We also see how Hitler demonized the Jews through the lies and propaganda, and then confiscated their property to put into the “king’s treasury” and help fund his war. Ultimately, we clearly see the spirit of Amalek in Hitler as he sought the extermination of the Jews. Like every other person who follows the spirit of Amalek, he targeted the weak the stragglers, the women and children.

An interesting prophecy in the Book of Esther makes reference to another 10 sons of Haman who were to be hanged. This comes from comparing Esther 9:7-10 and 9:13. It first talks about the killing of the tens sons of Haman, and then later on states they were hanged the next day. An explanation of this passage is that “there is a tomorrow that is now, and a tomorrow which is later,” in other words, a future fulfillment. This happened on 16 October 1946 at the conclusion of the Nuremburg Trials. Julius Streicher’s last words before being hanged were, “Purim Fest 1946!” This was a reference to the 10 Nazi’s who were being hanged for their attempt to exterminate the Jews. Esther received her request, and ten more “sons of Haman” were hanged. 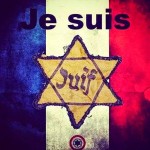 Today we face the same enemy of Amalek rising in the world. What would we expect of an enemy controlled by the Spirit of Amalek? As we have seen from Scripture, they would: 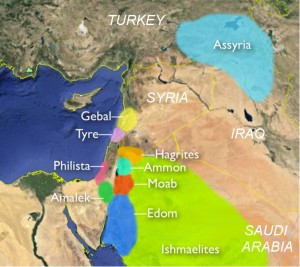 In Psalm 83, we see an alliance of nations, including Amalek, which comes against the nation of Israel. In verse 4, we see their purpose; “Come and let us cut them off from being a nation, that the name of Israel may be remembered no more.” The Biblical names of these confederates are: Edom, Moab & Ammon (children of Lot), Gebal, Tyre, Philistia, Ishmaelites and Hagarites, Assyria, and Amalek. The modern day names of these countries are Jordan, Lebanon, Gaza, Saudi Arabia, Syria, Iraq and Turkey. This confederation of nations had never happened before 70 AD; however we have witnessed at least two partial fulfillments of this Scripture in both the 1948 Arab-Israeli War and the 1967 Six Day War. Just prior to the Six Day War, Egyptian President Nasser declared “Our basic goal is the destruction of Israel,” and Adaam Pasha, Secretary General of the Arab League announced, “This will be war of extermination and momentous massacre.”

The Psalmist then asks the L-rd to defeat these nations like He defeated the Midianites through Deborah and Barak. Judges 5:4 is of special interest since it mentions Seir and Edom, “L-rd when you went out from Seir, when you marched from the field of Edom. The earth trembled, the heavens poured, the clouds also poured water.”

The Psalmist then compares this attack to the war of Gideon, where the “Midianites, Amalekites and all the people of the east were lying in the valley as numerous as locusts,” (Judges 7:11). The four kings were killed in this battle, and Gideon “took the crescent ornaments [moons] that were on their camel’s necks,” (Judges 8:21).

In all of the battles that we have seen in recent history, and will see in the future, our prayer, like the Psalmist, is that “they may seek your name, O L-rd,” and that all the people will “know that you, whose name alone is the L-rd, are the Most High over all the earth.” (Ps. 83:16-18)

In this prophecy of Psalm 83, and many like it, we see the ultimate fulfillment occurs at the return of Yeshua HaMashiach (Jesus the Messiah). This is what Balaam prophesied over Edom and Seir.

Just like in the time of Esther, there will be two banquets when Yeshua returns. In the Book of Revelation 19:9 it says, “Blessed are those who are called to the marriage supper of the Lamb!” This is the first feast, but there is also a “banquet” that Haman and the Amalekites are destined to attend. Just as G-d mocks Haman, and therefore Amalek in the Book of Esther, their ultimate “banquet” is spoken of several verses later, “Then I saw an angel standing in the sun, and he cried with a loud voice, saying to all of the birds that fly in the midst of heaven, “Come and gather together for the supper of the Great God,” (v.17). 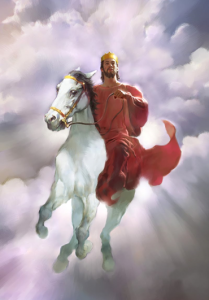 Yeshua then says in Rev. 22:12-13, 16-17, “Pay attention! I am coming soon, and my rewards are with me to give to each person according to what he has done. I am the ‘A’ and the ‘Z’ the First and the Last, the Beginning and the End. I, Yeshua, have sent my angel to give you this testimony for the Messianic communities. I am the Root and Offspring of David, the bright Morning Star. (CJB)”

All scriptural quotations are taken from the NKJV unless otherwise specified.