Who Was the Third Man?

Who Was the Third Man? 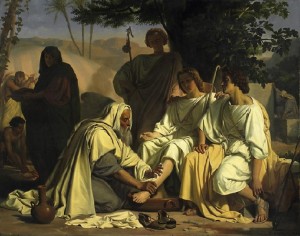 Who was the third man?

Rabbinic Judaism teachers that it was three angels, Raphael, Gabriel and Michael. But a careful reading of the text shows that this can not be the case for the following four reasons:

How do we intercede?

Abraham asks Adonai, Will you sweep away the righteous with the wicked? The understanding is that Adonai is perfectly right to judge the wicked.

The commentary The Pentateuch and Haftorahs compiled by J.H. Hertz on Genesis 18:23 talks about the nobility of Abraham’s character shown through his desire to pray for the salvation of the wicked. We also see the supreme value of righteousness and G-d’s readiness to pardon.

The one who will bring about ultimate justice is Adonai. Psalm 98:6-9, 96:12-13 and James 4:1-12. Hertz states that Justice  is the main pillar of God’s Throne. Although it is not the only or the greatest ethical quality. Justice is the foundation for all others. “That which is above justice must be based upon justice, and include justice, and be reached through justice. (Henry George)”

We see from the Good News of John 5:16-30 that all judgment has been given to the Son, so who was it that really brought fire down on Sodom? Genesis 19:24 reads, “And ADONAI rained sulfur and fire upon Sodom and Gomorrah from ADONAI out of the sky.” It would seem, therefore, that the Son of God, whom had a conversation with Abraham the day before, rained the fire from the Father in heaven.