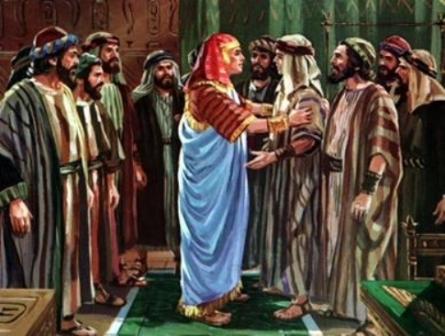 “Joseph is the last of the saints which occupies a prominent position in Genesis. In all there are seven—Adam, Abel, Noah, Abraham, Isaac, Jacob, Joseph. More space is devoted to the last of these seven than to any of the others. There are several reasons for this which appear on the surface. In the first place, the history of Joseph is the chief link which connects Exodus with Genesis; the earlier chapters of Exodus being unintelligible without the last ten chapters of Genesis. It is Joseph’s life which explains the remarkable development of the Hebrews from a mere handful of wandering shepherds to a numerous and settled colony in Egypt. But no doubt the chief reason why the life of Joseph is described with such fullness of detail is because almost everything in it typified something in connection with [Messiah].”

“As we read thoughtfully the books of the [Hebrew Scriptures] our study of them is but superficial if they fail to show us that in divers ways and by various means God was preparing the way for the coming of His Son. The central purpose in the Divine Incarnation, the great outstanding object in the life and death of the Lord Yeshua, were prefigured beforehand, and ought to have been rendered familiar to the minds of men. Among the means thus used of God was the history of different persons through whom the life and character of [Messiah] were to a remarkable degree made manifest beforehand. Thus Adam represented His Headship, Abel His Death, Noah His Work in providing a refuge for His people, Melchizedek pointed to Him as priest, Moses as prophet, David as King. But the fullest and most striking of all these typical personage was Joseph, for between his history and that of [Messiah] we may trace fully a hundred points of analogy!”

From Gleanings in Genesis by A. W. Pink.

This entire book can be found on line at: http://www.pbministries.org/books/pink/Gleanings_Genesis/genesis.htm