From Shepherd to King – The Victory (Part 1)

From Shepherd to King – The Victory (Part 1)

So let’s remember our key scripture. It says, “After removing [King Saul], He raised up David to be their king. He also testified about him and said, ‘I have found David, the son of Jesse, a man after My heart, who will do My will.’ From this man’s seed, in keeping with His promise God brought to Israel a Savior – Yeshua.”[1] (Acts 13:22-23) Also remember what Prov. 27:21 said, “A crucible is for silver and a furnace is for gold, but a person is proved by the praise he receives.” Today we will see how David handles promotion and victory and the ensuing praise.

The stage is set. The Philistines and the Israelites draw up battle lines, and to reduce casualties, the Philistines provide a champion. When this champion comes forward he is 3.06 meters (10 ft) tall, been trained in war since his youth, wearing a 56.7 kg (125 lbs) breastplate, and carrying a spear with a head weighing 6.8 kg (15 lbs). He is almost completely covered in armour and has a bad temper to boot. In verse 11 it says that Saul and all of Israel were dismayed and very terrified, and “the Philistine” berated them every day for 40 days (the symbol of testing). I think sometimes we are a little too hard on the army of Israel. We have a tendency to look down upon the Israelites because of this reaction, but how many of us have ever been in a real fight? How many of us have shared Yeshua with our workmates? How many of us have repented to our children, when we have not demonstrated Adonai’s love correctly? There are good reasons that the Scriptures often talk about not fearing. [2 Tim. 1:7-8, Rom. 8:15]  I have found over 110 times throughout Scripture where people are told, “Fear Not!”

By this time, David has returned to the sheep on the outskirts of Bethlehem. After the 40 days, David’s father, Jesse is worried. This is probably because there has been no news at all. David takes the 10 loaves and the 10 slices of cheese, and goes to seek out his brothers, but notice what he does first. He makes sure that someone is taking care of the sheep, that his responsibility is transferred to another (vs. 15). This is his same response when he gets to the battle lines. He makes sure that his baggage is with the baggage keeper. This action demonstrates his responsibility and faithfulness, and also his innocence concerning the charges that his eldest brother brings against him.

In verse 23 we see that David hears the words of “the Philistine”. Notice that Goliath’s name is only mentioned once in the story, and for then on he is only known as “the Philistine?” He was the representative of all they stood for. Another question is: When are we held accountable or responsible to stand up for truth and righteousness? When we initially hear. So when was David accountable for what he heard from the Philistine? When were the rest of the troops accountable? (also see Num. 30:3-5). And what words did David hear? We read them earlier in verses 8-10. What was David’s immediate response? And what was his intention? [Verse 26] So we immediately see that David had understood that this Philistine is mocking Adonai, and he shows that his trust in fully in Adonai, through his questions.

Since we are looking at David’s life as an example of the maturing process that Adonai may put us through, when we are confronted by the greatest challenge in our lives, what can we expect? Well, immediately David is attacked:

And what is David’s response to this personal attack? He simply brushes it off, turns away from his own brother, and goes on questioning the other men. (Vs. 29-30) [Matt. 10:34-39]

Did David immediately go to the king? No, once again he was invited and taken to him. Once with the king, David simply recounted how Adonai had trained him to win this battle through the difficult times he had previously experienced. In contemplating this, we sometimes gloss over the lion and bear, but have you ever seen one? And why didn’t David get bitter at Adonai for allowing so many bad things to happen to him? [Eze. 14:15-16] In none of these battles did David completely lose his trust in Adonai, but neither did he minimize each battle. In the Psalms he likens his enemies to lions, but even in the midst of trouble he would find his hope in Adonai. [Ps. 22:12-24] David’s faithfulness as a shepherd and his trust in Adonai had prepared him for this time with the Philistine. David recounts to the king, exactly why he will win this battle. It is because this Philistine has “defied the ranks of the living God” and Adonai will bring him the victory this time also. [1 Sam 17:32-37]

Why did the king offer David his armour? There are two possibilities: 1) Saul was honestly concerned for David’s well-being or 2) From a distance, who would the Army of Israel think was fighting the Philistine?  Why would I ask this? [1 Sam. 13:3-4]

There is an old saying, “Dance with the one that brung ya.” David chose to go with the tools that Adonai had used in his training; 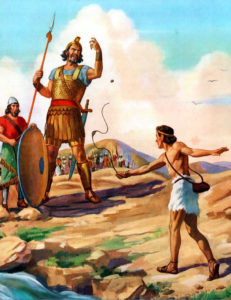 he did not change his personality or method right before his greatest challenge so far. We must be very careful that the character and skills that we gain when no one is looking or noticing must be maintained when we are thrown into centre stage. Too many times, I have watched people crack under the heat of popularity and prominence. Success, and the pride that it brings, have destroyed far more people than failure. C.S. Lewis put it this way, “According to Christian teachers, the essential vice, the utmost evil, is Pride. Unchastity (sic), anger, greed, drunkenness, and all that, are mere flea bites in comparison: it was through Pride that the devil became the devil: Pride leads to every other vice: it is the complete anti-God state of mind…… it is Pride which has been the chief cause of misery in every nation and every family since the world began.[2]” David knew that his victory rested entirely on Adonai, and not on his own power, or weapons or abilities. His actions are the perfect depiction of humility, for he was neither proud (knowing full well that his successes were due to Adonai’s strength) nor was he insecure (knowing that his failures were also in Adonai’s hand).

So to summarize and apply this to our lives:

[1]Unless otherwise noted, all Scripture references are taken from the Tree Of Life Version (TLV), 2014.