From Shepherd to King – The Victory (Part 2)

From Shepherd to King – The Victory (Part 2)

So why did David choose 5 stones (2-3 in dia.)? Well there has been a teaching that David was preparing to attack Goliath’s 4 brothers as well (see 2 Sam. 21:15-22), but the reality is that, at the time, David would have had no way of knowing how many brothers Goliath had. It is far more probable that David was expecting a drawn out fight, or that he simply picked as many as he could carry. I believe that the most important lesson we can learn from this is: Don’t try to make the text say more than it says.

From verse 41 we see that the text simply calls Goliath, “the Philistine.” Another reason for this could be that 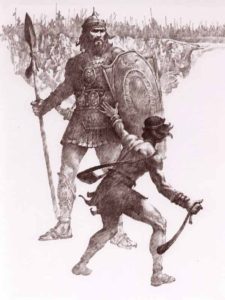 since the books of Samuel were written or at least compiled by a Scribe of King David, David had previously made reference to him by saying, “Who is this uncircumcised Philistine?” When we go to war we must always remember who our ultimate enemy is. We notice that the Philistine has an armour bearer, who’s primary job is to carry the Philistine’s shield. But where is David’s Shield-bearer? (Psalm 3:3, Psalm 18:35, Psalm 140:7, 2 Samuel 22:3, 2 Samuel 22:36) Is it any wonder that David writes all these Psalms acknowledging that Adonai is His Shield-bearer?

In Verse 42 we see the second time that David is referred to as having a Ruddy face and a handsome appearance. Although we might consider this a compliment in our culture, in these two cases (16:12 & 17:42) it is actually included in a derogatory sense. In the same way we might say that a man has a baby face, it was completely obvious to all that David was young and not a trained warrior. The Philistine then continues the beratement and sees David’s youth as a national insult.

David, however, is not silent in the face of the enemy’s threats. David wants everyone to know who the real victor will be of this battle. David states exactly Whom he represents:

He then goes on to explain exactly how the battle will go:

The most important part of David’s dialogue is what David calls the outcome of this victory. The word “Then” in Verse 46 is critical. “Then all the earth will know that there is a God in Israel, and so all this assembly will know that Adonai delivers not with sword and spear—for the battle belongs to Adonai—and He will give you into our hands.”  What is missing in this conclusion? Who gets the credit for killing this Philistine? This is the most telling part of David’s motive. When we win great victories, do we seek to associate ourselves with that victory? Do we seek to get the credit for the win?

As a side note: There is a Ugaritic Baal epic (from the same time period) “in which Anath thrashes the death-god, Mot. We are told (a) that Mot’s body will be food for the birds of the air, and, subsequently, (b) that El receives a sign that Baal “lives” and “exists.”[1] This could be something that David was combatting; or rather that Adonai was combatting through David.

Just from a story telling point, notice how few verses are actually attributed to the battle? It is as though the author wants to minimalize the battle and draw attention to the heart of David, and his motivations. In a way this battle is anti-climactic. The Philistine rose and begins to advance; David runs to meet him, slings a stone, hits his head, and it’s over. But it is not quite over. David has knocked him out, but then he goes over, takes the Philistine’s own sword and slays him by removing his head. Remember that back in 17:24, The Israelites had run in fear, whereas here David runs in to meet the enemy, fully trusting Adonai.

While gruesome, there is a very practical reason for David’s removal of the Philistine’s head. We must remember that both armies are at least a bow shot away from each other, which means that they are all watching this from a great distance. David left absolutely no doubt that this Philistine was dead, and the Israelites trounced the enemy all the way back to their own cities.

There is a very important piece of information in verse 54. Although David took with him the proof of the Philistine’s defeat to Jerusal

em and, he put the armour in his own tent. So which tent was this? Well as the one who defeated Goliath, all that belonged to him became David’s booty. David won the plunder of the Philistine’s armour, tent, and all the possessions he brought with him. And why would he take the head to Jerusalem? Some critical scholars see this as a “hopeless anachronism” because Jerusalem was not captured until 2 Sam. 5:6-10. However there are actually several reasons for why David could have done this. (1) David could have been putting the Jebusites on notice, that their days were numbered. (2) He may have hung it from their wall at night (as was done with Saul and Jonathan’s body, 1 Sam. 31:10). (3) It was the largest town between the battle and his home town of Bethlehem.

After a victory, do we parade what we have done? Do we seek more praise from people after the enemy is defeated? Or do we seek to focus the attention back on Adonai? Rav. Sha’ul says to the Thessalonian believers:   “For as you know and God is witness, we never came with a word of flattery or a motive of greed—  or seeking glory from people, whether from you or from others, even though we could have thrown our weight around as emissaries of Messiah. Rather, we proved to be infants among you. Like a nursing mother cherishes her children, in this way we were yearning for you. We were delighted to share with you not only the Good News of God but also our very souls, because you had become dear to us. (1 Thess. 2:5-8)

Yeshua also talks of this concerning Himself, in John 7:16-18, “Yeshua answered, “My teaching is not from Me, but from Him who sent Me. If anyone wants to do His will, he will know whether My teaching comes from God or it is Myself speaking. Whoever speaks from himself seeks his own glory; but He who seeks the glory of the One who sent Him, He is true and there is no unrighteousness in Him.” If there was anyone who could have received more honour and glory, it would have been Yeshua. But just as David had done in his victory over the Philistine, so also Yeshua sought to bring glory to His Father. (also see Prov. 25:27)

When we accomplish something great for Adonai, we can do one of the following:

Although this was a great test of David’s character and his trust in Adonai, the victory was short lived, and the worst is yet to come.