From Shepherd to King – The Son-in-Law

From Shepherd to King – The Son-in-Law

Acts 13:22-23 says, “After removing [King Saul], He raised up David to be their king. He also testified about him and said, ‘I have found David, the son of Jesse, a man after My heart, who will do My will.’ From this man’s seed, in keeping with His promise God brought to Israel a Savior – Yeshua.”[1] I also want to read the words of Yeshua in Mark 10:6-9 “But from the beginning of creation, God ‘made them male and female. For this reason a man shall leave his father and mother and be joined to his wife, and the two shall become one flesh.’ So they are no longer two, but one flesh. Therefore what God has joined together, let no man separate!”

This passage starts out with the covenantal love between Prince Jonathan and David. In a couple of ways this covenant is the silver lining of the 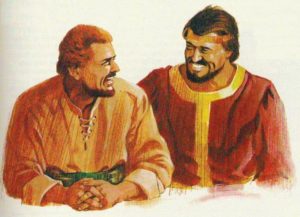 following 5 chapters. There are actually three different covenants made between Jonathan and David; here in verses 1-4, and again in 20:16, and 23:18. And we see that the children of King Saul show more love and loyalty to their father’s competitor than to their own father. The word for love here is “ahav”, and is used in this context to speak of covenantal and friendship love. The closest parallel for this statement “loved him as himself” or “loved him as his own soul (KJV)” is found in Gen. 44:30 which refers to Jacob’s soul being knit with his son Benjamin.

Vs. 5-9: David’s favour in the eyes of the king did not even last to the end of the week. Have you ever heard of the “evil eye”? This is a classic example of envy where the song of the people was “evil in his eyes,” and “Saul eyed David from that day on.” Unfortunately promotion is often accompanied with being envied, and David’s next phase of maturing would be in very hostile circumstances. Also have you ever noticed that there is often a backlash immediately after a victory? This was the same for David.

Vs. 10: So where does pain and suffering come from in our lives? For David it came from a man, the evil spirit that was on him, and from God who allowed it to happen. There is rarely a simply answer to life’s suffering. Paul spoke concerning some of the suffering he experienced, that it was there to cause him to trust more in Adonai [2 Cor. 12:7b-10].

On another note, see how the attacks of the evil spirit have increased as Saul has continued to sin through envy? At this point David is needing to play every day for Saul so that Saul has relief from the spiritual attacks. Saul goes from envying David, to attempting to murder him, to fearing him, to dreading him. We know that the “wages of sin is death” (Rom. 6:23) and that the adversary comes to “steal, kill and destroy.” (Jn. 10:10) When we walk in the deeds of the flesh we open ourselves up to the attack of evil spirits. [Gal. 5:13-25]

Vs. 12: Did Adonai protect David in the midst of the trials or remove him from them? Well actually He did both, at different times. In the same way Yeshua sometimes walked through the angry crowds (see Lk. 4:30) and at other times He did not (see Gethsemane in Jn. 18:1-9). David refused to get bitter, and continued to remain faithful, both to Adonai and to King Saul, a true example of loving his enemy (Lk. 6:35). Regardless of David’s new position he continued to excel. We will see a little of his emotions at this time when we read from Psalm 59, next week. But I noticed in Ps 18:37, David says of Adonai, “You broaden my steps beneath me, so my ankles have not slipped.” This was a reality, not just poetic figurativism.

Vs. 17-19: Although Saul had promised his daughter to David (for killing the Philistine) now Saul sought to make David his son-in-law for political (or nefarious) reasons. There is a very interesting parallel between Jacob, Leah and Rachael, and David, Merab and Michal. i.e. They were both offered the older sister before the younger, the younger sister was preferred, etc. But one major difference is seen. Jacob loved Rachael, but the story of David and Michal only records Michal’s love of David, not David’s love of Michal. This becomes even more noticeable later on in the story.

In both cases, Merab and Michal, we can see that David recognizes his lowly position (vs. 18 & 23) On the second 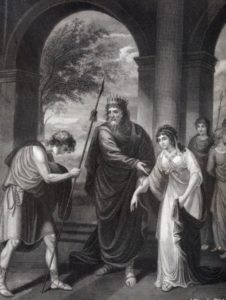 attempt, however, we see Saul far more persistent. Saul, gets his courtiers to talk to David privately, he even negotiates the dowry. But in the end, this marriage is more of a political marriage in the eyes of both Saul and David, and the one who truly loses out is Michal. (1 Sam. 25:44, 2 Sam. 3:13 and 2 Sam. 6:20-23) Notice the naming of Michal in verse 28? The same was true for the older sister, both were always referred to as “Saul’s daughter” reinforcing the political nature of this union.

I want to close by going back to the passage from Mark we read at the beginning. There Yeshua brings the marital relationship back to its proper perspective. Unfortunately we know from later in the story that, David’s major stumble in life is his lack of satisfaction in the “wife (singular) of his youth.” (Prov. 5:18-20 & Mal. 2:15) He ended up following the culture of his time instead of what the Torah actually said (Deut. 17:17). An interesting parallel to this story is in the movie “Anna and the King.”

King Mongkut: “Am wondering, giving circumstances, if it is proper for king to ask Anna to dance.”

Anna Leonowens: “I have danced with a king before, Your Majesty.”

King Mongkut: “And I with an English woman.”  [They start to dance, and he pulls her close]

King Mongkut: “Until now, Madame Leonowens, I did not understand supposition, man can be satisfied with only one woman.” [He kisses her hand, and they dance closer.]

The king had finally seen a woman as his equal. The biggest problem with the deviation from Adonai marital standard, is that people are devalued in the process, and the image of God (in who’s image we are made) is besmirched.

So in terms of applying this to our lives, we can see:

[1]Unless otherwise noted, all Scripture references are taken from the Tree Of Life Version (TLV), 2014.