From Shepherd to King – Abigail the Intercessor

From Shepherd to King – Abigail the Intercessor

We mentioned last week that these three chapters (24 – 26) are a literary unit. Both Chapters 24 and 26 talk of Adonai delivering Saul into David’s hand, and then Chapter 25 is sandwiched in the middle. In the story of Nabal and Abigail, we even see that Nabal is almost like Saul’s alter ego.[2]

We talked last week about the authorship of Samuel. The death of Samuel actually marks the transfer of authorship from him to Nathan and Gad the prophets. [1 Chron. 29:29-30] Samuel represents the last bit of conscience that King Saul had as well as the last human protector of David. Samuel died without seeing the prophesy of David’s kingdom fulfilled, however, Saul did just acknowledge that David would be the next king (24:20). Regardless, David saw the necessity of moving camp.

We have major contrast between Nabal and Abigail here in vs. 3. Abigail (My Father is Joy) is beautiful “lovely in form” and intelligent “good in understanding” whereas Nabal (Fool) is harsh and evil in his dealings. The text has a lot to say about the heart of Nabal (vs36-37) which seems to allude to Ps. 14:1 “For the music director, of David. The fool (nabal) said in his heart: “There is no God.” They are corrupt; their deeds are vile; there is no one who does good.” (Also see Ps. 53)

David is simply asking for “whatever” supplies Nabal might have available as an expression of gratitude since David and his men had defended Nabal’s property for an extended period of time (vs.15-16). This is not an unreasonable request, and in fact all of Nabal’s servants acknowledge this. But this request is not just rejected, but rejected harshly and with insult. Remember that “Jesse’s Son” was the insult that Saul had levelled against David. The question is this, however: Just because someone is a fool, and just because they insult us, and refuse to be gracious to us, does this give is the right to retaliate with violence? Remember how we said that David had a pattern? 1) David prays to Adonai. 2) Adonai answers and directs the attack. 3) All the men go up to battle. 4) They win the battle and take the spoil. 5) They share the spoil with the surrounding Israelite cities. What is missing from this story? But Adonai is merciful this time to David, “One of the young men told Nabal’s wife Abigail …”

Notice that David makes a vow invoking the name of Adonai in vs. 21-22? Remember when Saul made a rash vow in (1 Sam. 14:24-45) and it caused him to lose respect before the people of Israel? Is it more important to keep a vow and bring death or to humble ourselves before Adonai and break our word? Yeshua taught from Ecc. 5:4-5, when he said “Do not swear at all” [Matt. 5:33-37] The teshuva (turning/repentance) that David models here is “not repentance from something that he did wrong, it’s that David had an openness. He realize[d] that the criticisms of Abigail were correct and he immediately accepted it and stopped in his tracks, no matter how worked up he has been; he realized that she was right, he backed down immediately and he thanked her for stopping him.”[3] 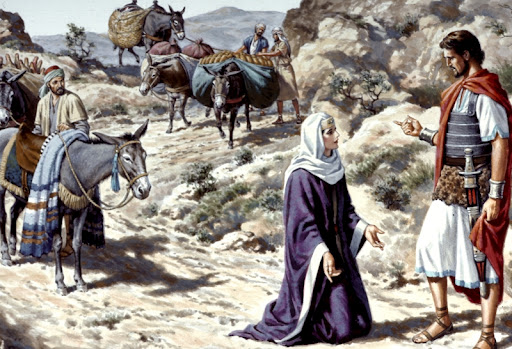 Abigail is the perfect example of how to respond in a difficult marriage. Her wisdom shown in her response when her husband was drunk, actually saved Nabal from death at the hand of David. She did not pretend that Nabal was perfect, but she still did all that was in her ability to protect her household. She interceded on behalf of her husband. She also knew that her ultimate reward was from Adonai. She had cultivated trust in God and His plans, grown in her individual faith, prayed for her husband, acted for his good, focused on God’s grace to her, and given it in return to her husband.[4]

We have a lot we can learn from Abigail’s intercession. (vs. 23-31 also see 2 Sam 14:4-8) Firstly she falls before David in humility and begs that the judgement would be upon her. Although she acknowledges that her husband truly is a fool, she basically states that he is not worth the effort. She then invokes the name of Adonai, reminds David of Adonai’s restraint, and that vengeance is in the hand of Adonai. She has taken the sin of her husband upon herself, and she begs David for forgiveness. She then reminds David of the future promises of Adonai, and that this action of vengeance should not be on David’s record.

Just as David sent his men to collect some of the harvest from Nabal, so also Yeshua has sent us into the world, to collect the harvest. [Read Lk. 10:1-16] Some of the similarities include: 1) We are not sent alone, by ourselves; 2) We are sent to many hostile environments; 3) We are to proclaim, “Shalom be on this home” where ever we go. 4) If we are not received well, then judgement will come to that town; 5) When the Son of David comes, it will be to judge those who have insulted Him, though us; 6) Yeshua will be “met on the way” by His future Bride; 7) And after all this, Adonai will bring judgement on those who have said “there is no God.”

[1] Unless otherwise noted, all Scripture references are taken from the Tree Of Life Version (TLV), 2014.