Introduction to the first Letter to Corinth

Introduction to the first Letter to Corinth

This is the first letter that I have taught on in depth, and I think that a little discussion about how to interpret is due. In many ways, reading through the Epistles or letters included in the Bible is like listening to one side of a phone conversation. There are often references to questions that have been asked, situations that have occurred and other correspondence. For instance, this letter is actually the second letter to the Congregation in Corinth as we will see in Chapter 5:9. Part of understanding of this letter, will be to recognise where Paul is quoting the Corinthians, and then understanding his response. Another important point to remember, is that letters are personal. Even though this letter was written to a group of people, understanding the situation of those people will be critical when it comes to applying the principles to us today. Most of today’s discussion will be to understand this context, and therefore to understand the reason that this letter was written.

One of the greatest resources we have that helps us understand the letters, is the book of Acts. Paul made several missionary trips, and on his second trip is when he established the congregation in Corinth. 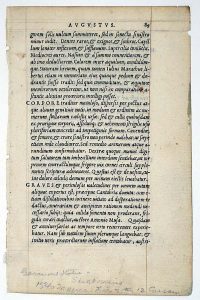 This passage tells us some important background for the Congregation in Corinth. In Vs. 2 we see Paul connecting with Aquila and Priscilla who seem to already be believers in Yeshua. Paul explicitly states in 1 Cor. 1:14-16 that he did not immerse either of them and Acts 18: 2 states that they had been thrown out of Rome by Emperor Claudius. A Roman historian, Suetonius, states that the reason that all the Jews were expelled from Rome was due to a riot “.”[ii] This is quite probably a reference to the Messiah Yeshua, or Christos in Greek. What had just happened to Paul in Thessalonica (Acts 17:5) and Berea, also seems to have happened to all the believers in Rome.

As a teenager I wanted to be a missionary. One of the elders in the congregation, who had been a missionary in Kenya, wisely told me that I should get a University degree, because even missionaries need to eat. I chose Mechanical Engineering as my “tent-making” career because I figured that I could use it wherever Adonai would send me.

This concept of “tent-making” comes directly from this passage in Acts 18:3. Paul worked with Aquilla and Priscilla as a leatherworker during the week, and on the weekends, he would debate and teach in the Synagogue. When Silas and Timothy came, they probably brought a financial gift with them from the Philippian Congregation (2 Cor 11:9, Phil. 4:14-16). This allowed Paul to preach, share and teach full time. Paul was able to lead two of the leaders of the Synagogue to Yeshua, Crispus (18:8) and Sosthenes (18:17). This is probably the same Sosthenes that Paul mentions in 1 Cor. 1:1.

Paul’s method for proclaiming the Good News in a new place was to firstly go to the Synagogue, and secondly go to the Gentiles. We see this explicitly stated in Rom. 1:16, “to the Jew first and also to the Greek.” Corinth was no different. Paul started at the Synagogue, and after a while he was “resisted and reviled” so he went next door and started a competing congregation. Paul stayed in Corinth for 18 months at the direction of Adonai through night vision. 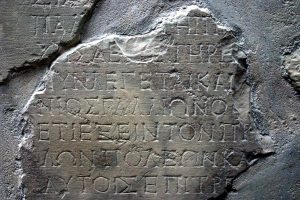 In Acts 18:12 we see that eventually the unbelieving Jews brought Paul before Gallio the proconsul of Achaia. This little bit of information makes Paul’s missionary journey to Corinth “one of the most certain in NT chronology.”[iii] The normal length of time that a proconsul served was one fiscal year. An archaeological inscription was found in Delphi stating that Gallio served as proconsul during Emperor Claudius’s 26th year. This would mean that Gallio was proconsul from July 1, 51 AD to June 30, 52 AD, and that Paul’s stay in Corinth was from about March, 51 AD to Aug 52 AD. “In fact, scholars studying Pauline chronology usually move forward and backwards for that point.”[iv]

When Paul left Corinth, he took Aquilla and Priscilla with him to Ephesus. This becomes important later because after Paul left them and continued his journey, a man named Apollos came to Ephesus. Apollos was already a believer in Yeshua because of John the Immerser’s teachings, but Aquilla and Priscilla taught him “a more excellent way.” Apollos then travelled to Corinth to help the Congregation there, and Paul returned to Ephesus. It is from his 3 year stay in Ephesus (approx. Aug 53 AD to Mar 56 AD) that Paul authored his 4 letters (possibly only 3) to the Congregation in Corinth. The first and third letters, are lost. All we know of them is what is referred to by Paul in 1 and 2 Corinthians.

Now for the Why. Why did Paul author this letter? Letters were very expensive, and this one is long. The reasons of Paul can be summarised as follows:[v]

We will go into the detail of these issues over the next weeks as we unpack each chapter. For now, let’s close by going back to the first three verses that we read. [Read 1 Cor. 1:1-3] Even with all the issues that this Congregation is dealing with, Paul starts by affirming them as Kedoshim, Saints, who Yeshua has made holy. Paul says in his second letter to Corinth, “Therefore if anyone is in Messiah, he is a new creation. The old things have passed away; behold, all things have become new.” While we still wrestle with the “old ways” of the “old nature” or the flesh, our identity has been changed, and we are new creations in Messiah. That should be hope for all of us!