The Importance of Passover & the Feasts

Passover is the most important Feast in Judaism for it celebrates the L-rd’s deliverance of Israel from slavery in Egypt, and their becoming G-d’s chosen people. For Messianic Jews and Christians, Passover is also our most important Feast, because it is when Yeshua the Messiah died and rose from the dead, delivering us from slavery to sin, and giving us the free gift of eternal life. One of Yeshua’s last earthly acts was to celebrate Passover. Gathering His disciples in a small guestroom in Jerusalem, He led them in a Seder. Here He said to them, “With fervent desire I have desired to eat this Passover with you before I suffer,” (Luke 22:15). During the Seder, Yeshua revealed to them the mysteries of G-d’s redemptive plan. It was no coincidence that He chose the Passover to do so, for in the story of the Passover lamb, Yeshua could best communicate the course that He would be taking over the confusing hours that were to follow. He spoke to them about His Body and Blood and continued to explain how He would have to suffer and die, but He would rise from the dead the third day (Matt. 16:21, Luke 22:14-23). Each of the Biblical Feasts teaches us about our wonderful relationship with G-d. His whole redemption story (the Gospel) is portrayed for us in these festivals, which can be found in Leviticus 23. The Jewish people expect their Messiah’s life to fulfill all the Biblical Feasts as each feast paints a picture of Israel’s coming Messiah, whom Messianic Jews and Christians believe to be Yeshua. Shabbat and the Biblical Feasts are kept as prophetic memorials of what Yeshua fulfilled at His first coming and what He will fulfill when He returns to Israel. The Spring Feasts were fulfilled with Yeshua’s death (Passover), burial (Unleavened Bread), resurrection three days later (Firstfruits) and then the outpouring of the Ruach HaKodesh (Holy Spirit) at Shavuot (Pentecost). The Autumn Feasts are Rosh Hashanah (the new year) also called the Feast of Trumpets, Yom Kippur, (the Day of Atonement), and Sukkoth (the Feast of Tabernacles). These Feasts will be fulfilled when He comes back as King of kings, judges the nations, and dwells with His people Israel. The prophet Zechariah says that during the millennial reign, those nations who do not come up before Him for the Feast of Tabernacles will not get rain (14:16).

The Biblical Feasts are sometimes referred to as “The Feast Days,” “The Holy Days,” or “The Jewish Feasts;” however, throughout Scripture, they are not the Jewish feasts or holidays, but are instead referred to as “the L-RD’s appointed times.” In Leviticus 23:1-2, The L-RD said to Moses and said, “The feasts [moedim] of the L-RD, which you shall proclaim to be holy convocations [mikra’ei], these are My feasts.” The Hebrew word, moedim, means “appointed times, places, or meetings”. These are the times that G-d has put on His calendar to meet with us. They are the L-rd’s Feasts, His appointed times! The Hebrew word, mikra’ei, means assembly or rehearsal. Rehearsals for what? The first and second coming of Messiah! In Colossians 2:17, Sha’ul (Paul) states that these “are a shadow of things to come.” The Feasts are prophetic memorials of Yeshua. This is why believers are blessed by celebrating them! We are celebrating our L-rd and Saviour, Yeshua the Messiah! The believer in Yeshua finds deeper significance and faith in seeing G-d’s commandments and the customs of His chosen people, Israel, in the light of Yeshua. These commandments and customs are relevant to our faith, and not in opposition to it. We gain no merit with G-d in observing the festivals; but if we ignore them, we miss the blessings of a deeper appreciation of the heritage that is the cradle of our faith and our salvation.

Comments on Passover in the Brit Hadashah (New Testament)

The Apostle Sha’ul uses the Feast of Passover, Feast of Unleavened Bread and Feast of Firstfruits as illustrations for the congregation in Corinth. Why would he speak of the feasts if the believers did not keep or understand them? It is evident from both Scripture and historical documents that the early believers in Yeshua not only understood the Feasts but also kept them. 1 Corinthians 5:6-8, “Your boasting is not good. Don’t you know the saying, “It takes only a little hametz [yeast] to leaven a whole batch of dough?” Get rid of the old hametz, so that you can be a new batch of dough, because in reality you are unleavened. For our Pesach lamb, the Messiah has been sacrificed.   So let us celebrate the Seder not with leftover hametz, the hametz of wickedness and evil, but with the matzah [unleavened bread] of purity and truth.” (CJB) 1 Corinthians 11:23-26, “For what I received from the L-rd is just what I passed on to you — that the L-rd Yeshua, on the night He was betrayed, took bread; and after He had made the b’rakhah [blessing] He broke it and said, “This is My body, which is for you. Do this as a memorial to Me”; likewise also the cup after the meal, saying, “This cup is the New Covenant effected by My blood; do this, as often as you drink it, as a memorial to Me.” For as often as you eat this bread and drink the cup, you proclaim the death of the L-rd, until He comes.” (CJB) 1 Corinthians 15:20-23, “But the fact is that the Messiah has been raised from the dead, the firstfruits of those who have died. For since death came through a man, also the resurrection of the dead has come through a man. For just as in connection with Adam all die, so in connection with the Messiah all will be made alive. But each in his own order: the Messiah is the firstfruits; then those who belong to the Messiah, at the time of his coming.” (CJB)

So when did the believers in Yeshua stop celebrating Passover? In The Passover Haggadah by Nahum Glatzer, Solomon Zeitlin wrote, “The early Christians celebrated the resurrection of Jesus and called it pascha. It was observed at the same time that the Jews observed Passover…The bishop sent out epistles, called paschal epistles, to notify the Christians when pascha … would fall. At the Council of Nicea, 325 C.E., the Christians were prohibited from celebrating pascha at the time the Jews were celebrating Passover. The emperor Constantine, who presided over the Council, said, “Let us have nothing in common with the detestable Jewish crowd.” However… the institution of the Eucharist is really based on the Jewish custom, during the Second Commonwealth, of giving thanks to G-d on the first night of Passover for their redemption, over unleavened bread and a cup of wine.”

Passover and the End Times 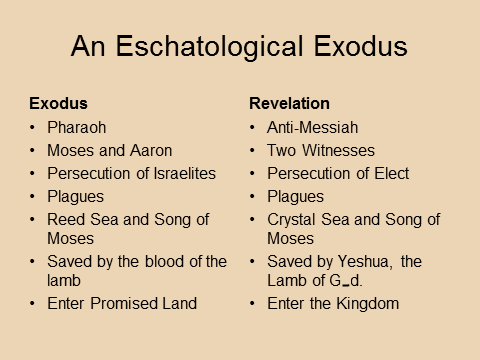